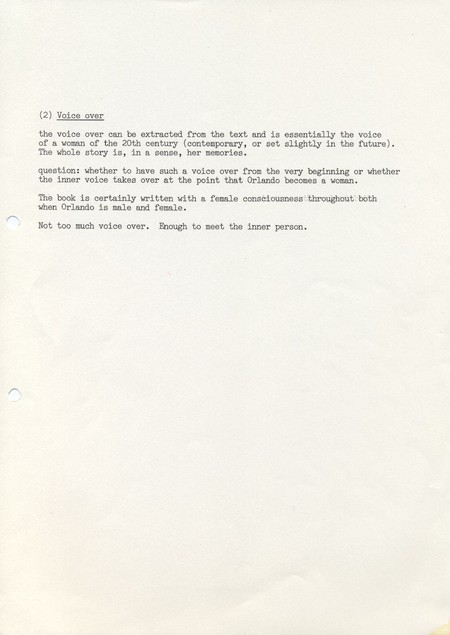 Orlando the novel to Orlando the film: Intertextuality and gender by Briony Stas, Student

Thoughts on how Sally Potter used the visual medium of film to translate Virginia Wolf's literary exploration of gender, which is given to us largely through Orlando's internalised thought, into the screen.

Gender and Androgyny within Orlando by Anna De Guia-Eriksson, Student

Exploration on the ways in which gender becomes a fluid concept throughout Orlando and the aspects of the film that contribute to this.

Orlando from Novel to Film by Rea Anastasopoulou, Student

Pathway to reflect upon and illustrate the process of adapting Virginia Woolf’s 1928 novel, Orlando, to film.

Initially, Sally Potter had the narrative of Orlando living each moment as the present. For instance Orlando in 1592, tells the story as if it were 1592; the Orlando in 1700 tells the story as if it were 1700, etc. However, later this changed and bore more resemblance to Virginia Woolf's prose. The film took on the structure of memories, the present being 1992. Therefore, the narrative of the film did not alter with the aging/ developing of character. The narrator of the film is the female mother Orlando, and thereby tone and language differs from the language of a young boy. In the part of "Death" we can see many differences between Potter's shooting script and the finalized version in her process of adapting Virginia Woolf's novel "Orlando".

The Concept of Gender in the Film Orlando by Tara Campbell, MA Student