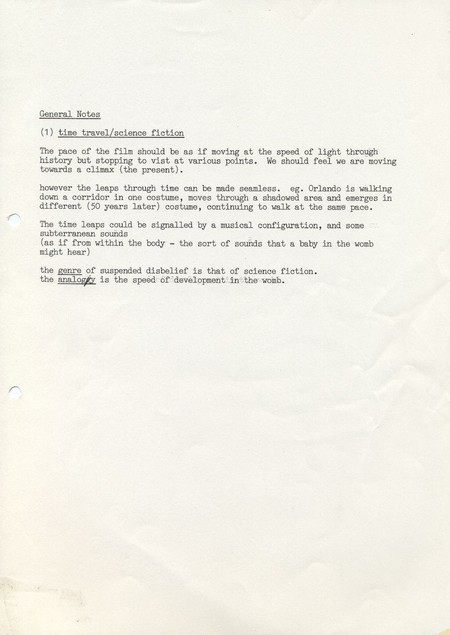 Gender and Androgyny within Orlando by Anna De Guia-Eriksson, Student

The Flow of Time by Kwasi Appiah, Student

As Tilda Swinton says of Orlando in the Introduction of the 2012 edition: "Where I once assumed it was a book about eternal youth, I now see it as a book about growing up, about learning to live". Sally Potter's presentation of time movement and Swinton's portrayal of a maturing Orlando is crucial in capturing this element that, whilst not ageing, he/she is growing as a person; becoming wiser.

The way in which Sally Potter intertextually represents the idea of gender through \'The Eternal Recurrence\' found in the original novel, by way of visual expression. by Maxwell Gutteridge, Student

The way in which Sally Potter intertextually represents the idea of gender through ' The Eternal Recurrence' found in the original novel, by way of visual expression.

These assets that I've linked together in this pathway show that the whole film is meant to be a gestation period until the end (the present) when Orlando and her child are born. Rather than showing actual birth though, Sally Potter decided to follow "BIRTH" with a story draft for a publisher to read. The draft in the film is presumably a culmination of the entire story of Orlando's life, that we just saw. We might think also about the film as (figuratively) Sally Potter's child, based on these findings.

The essence of design in adaptation by Mitchell Harris, Student

The focus here is on the nature of design in adaptation. One example includes key aspects such as location from pre-production sketches to how the final set looks in production, and how this relates to the words found in Woolf's novel. Additionally it's interesting to note the differences in adaptation across Orlando's 400 year journey.