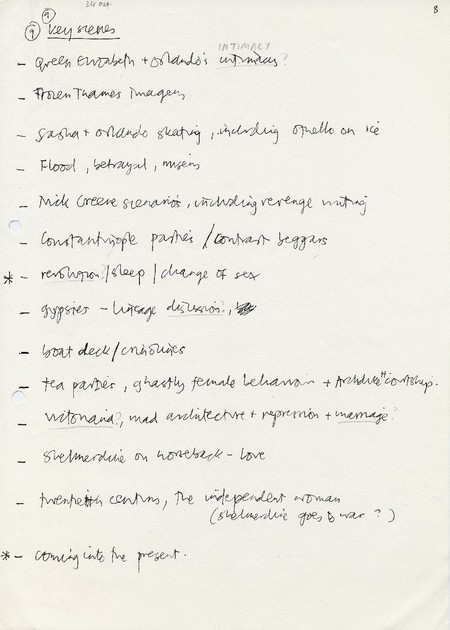 Orlando- the ending by Bella Wing-Davey,

Distillation of Adaption by Daniel Fisher,

Orlando- A film by Sally Potter based on the novel by Virginia Woolf by Lidia Buonaiuto,

Reflect upon and illustrate the process of adapting Virginia Woolf's 1928 novel, Orlando, to film.

Sally Potter's approach to gender in her adaptation

Orlando and intertextuality by Sam O'Sullivan,

Voyeurism and the Camera\'s Point of View by Heather Wakeman, Student

The Literary Process of Adaptation by Emma Lieberman, Student

In a novel-to-film adaptation, one of the most interesting things to do is look at the source novel and see how it differs from the screenplay. Film is a visual medium, making it very different from the literary medium of the novel, but the adapted screenplay is like the bridge between the two, and can show the most striking resemblances and differences between the two versions of the story.

Adapting Orlando through the words of Sally Potter by Gaia Porcu, Student