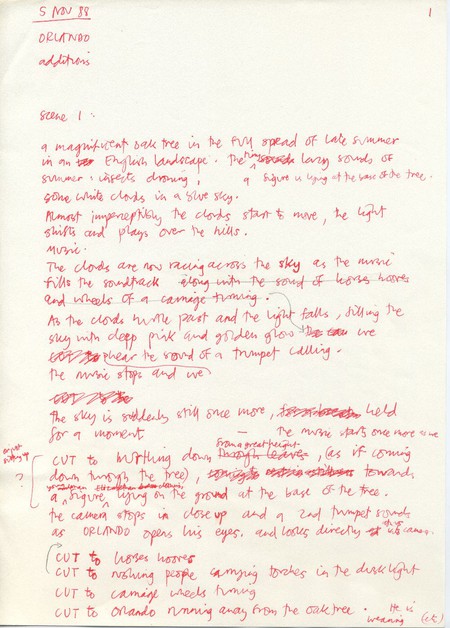 “[W]ord symbols must be translated into images of things …” by Amelia Jefferies, Student

How successfully does Sally Potter make the adaptation her own?

Orlando\'s Look Directly At The Camera by Stephanie Hirlemann, Student

I compiled various assets about how Orlando looks at the camera. While I was watching the film, I noticed that it was a specific stylistic choice. By sifting through the documents, this knowing look from Orlando meant to address the viewers. In Sally Potter's commentary, she explains the direct look exemplifies a “kind of release… a kind of flying out of the historical period right into the present moment." These random moments when Orlando looks at the camera brings a sense of knowing and feeling that the viewers can relate to.

Only Connect by Charles Drazin,

The purpose of this pathway is to 'reflect upon and illustrate' the process of adapting Orlando.

The Literary Process of Adaptation by Emma Lieberman, Student

In a novel-to-film adaptation, one of the most interesting things to do is look at the source novel and see how it differs from the screenplay. Film is a visual medium, making it very different from the literary medium of the novel, but the adapted screenplay is like the bridge between the two, and can show the most striking resemblances and differences between the two versions of the story.

An exploration of how Sally Potter's use of direct-to-camera address in Orlando functions as a way of adapting Woolf's literary voice to the screen.