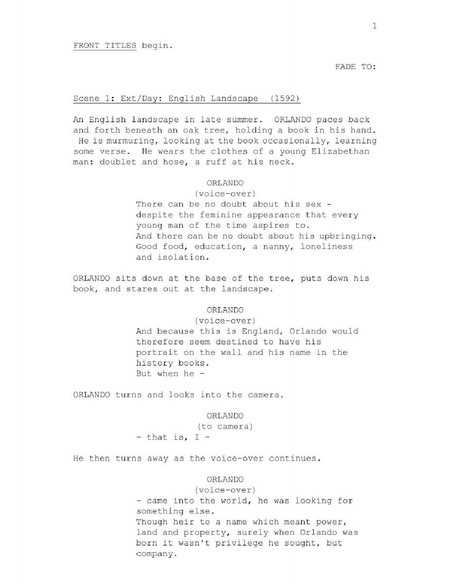 An investigation of the intertexuality in Orlando by James Anderson,

Intertextuality in Orlando: gender fluidity and the re-shaping/accentuasion of themes and essence.

Orlando the novel to Orlando the film: Intertextuality and gender by Briony Stas, Student

Thoughts on how Sally Potter used the visual medium of film to translate Virginia Wolf's literary exploration of gender, which is given to us largely through Orlando's internalised thought, into the screen.

Some explanations for Potter's decision on certain locations, set and costume design, and focusing on cinematography.

The gender of Orlando by Maria Moller Kjeldgaard, Student

Orlando\'s Look Directly At The Camera by Stephanie Hirlemann, Student

I compiled various assets about how Orlando looks at the camera. While I was watching the film, I noticed that it was a specific stylistic choice. By sifting through the documents, this knowing look from Orlando meant to address the viewers. In Sally Potter's commentary, she explains the direct look exemplifies a “kind of release… a kind of flying out of the historical period right into the present moment." These random moments when Orlando looks at the camera brings a sense of knowing and feeling that the viewers can relate to.

Initially, Sally Potter had the narrative of Orlando living each moment as the present. For instance Orlando in 1592, tells the story as if it were 1592; the Orlando in 1700 tells the story as if it were 1700, etc. However, later this changed and bore more resemblance to Virginia Woolf's prose. The film took on the structure of memories, the present being 1992. Therefore, the narrative of the film did not alter with the aging/ developing of character. The narrator of the film is the female mother Orlando, and thereby tone and language differs from the language of a young boy. In the part of "Death" we can see many differences between Potter's shooting script and the finalized version in her process of adapting Virginia Woolf's novel "Orlando".

An exploration of how Sally Potter's use of direct-to-camera address in Orlando functions as a way of adapting Woolf's literary voice to the screen.