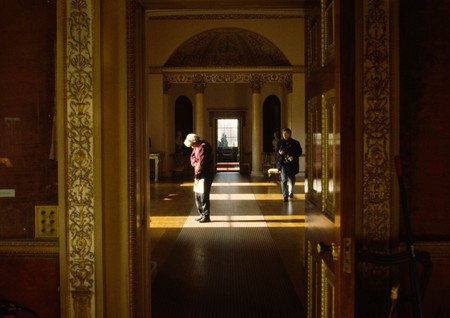 Intertextuality in Orlando by Emily Spyt,

Potter says that ‘ in order to keep faith with Virginia Woolf’s use of real time ending the novel, the film had to end when it was completed-1992.’ Potter does this successfully as not only does she take on this idea the ending is not formed until everything else is shot. Although the film ending and the novel endings are different Potter loyally attempts to ‘think myself in Virginia Woolf’s consciousness’ and create a appropriate ending that Woolf herself might have written if she had lived until 1992.

Searching for Clarify Through Mazes by Simone Spira, student

Orlando is searching for the light at the end of the maze throughout the entire movie; the maze parallels to her life as she's constantly struggling with love, gender, sexuality, etc. However, at the end of the movie, after she's moved through time, she finds clarity with the angel who reveals herself between two branches, as if Orlando is finally emerging out the maze and into the light.