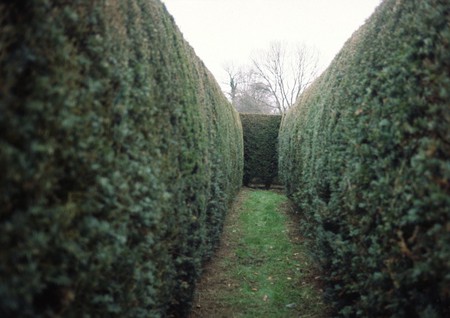 Translating imagery from text to screen by Flora Bartlett, Student

Examination through archive materials of how Sally Potter takes the artistic description of scenes from the novel and translates that into a visual form through cinematography and set design.

Some explanations for Potter's decision on certain locations, set and costume design, and focusing on cinematography.

The intertextual relationship between Woolf and Potter's imagining of Orlando through the location of Hatfield House.

Searching for Clarify Through Mazes by Simone Spira, student

Orlando is searching for the light at the end of the maze throughout the entire movie; the maze parallels to her life as she's constantly struggling with love, gender, sexuality, etc. However, at the end of the movie, after she's moved through time, she finds clarity with the angel who reveals herself between two branches, as if Orlando is finally emerging out the maze and into the light.

Adapting Orlando: From Word to World by Aniya Das, Student

In writing Orlando, Virginia Woolf had to her disposal the infinite power of the English language. Using her imaginative flair for writing, Woolf was able to vividly describe and create the world in which Orlando lives; we are transported through time, and to incredible landscapes all across the globe with ease. Sally Potter then, had the largely more difficult task of physically recreating this diegetic world. Through this pathway I will explore the real life locations Potter used to create Orlando's world, and the reasons behind these choices.

About the Location by Peng Zhang, MA Student